Samantha Rhodes, a.k.a the Womb Ripper, is the main antagonist in Bloodwash.

Samantha is a tall, slender Caucasian woman in her late 20's to mid 30's. During her murderous rampage as the Womb Ripper, she was entirely naked, showing her androgynous, scarred body, and wore what appears to be a baby mask, presumably made from the skin of the fetuses she took from her victims. In her right hand, she holds a heavily degraded kitchen knife, which she uses to slash and eviscerate her victims.

She displayed superhuman strength and durability, as she was able to lift an adult man with one arm and withstand multiple gunshots.

Before her psychological breakdown, Samantha was described as being a nice person, but any trace of her old personality is gone and she has become a demented and rage-stricken shadow of her former self.

As the Womb Ripper, she had become devoid of any shred of humanity and was reduced to an animalistic state, vocalizing almost exclusively through wails and screams. Despite being obviously deranged, she is not mindless and still seems to be possess most of her cognitive abilities, allowing her to operate in an organized, downright devious manner, tracking down suitable victims and purposely disposing of bodies for authorities to find, all the while remaining elusive and keeping her own existence hidden from the city.

Samantha is highly sadistic, not only physically torturing victims before their deaths, but toying with and terrifying them via means of psychological warfare, usually thematically referencing their pregnancy in some twisted way. Once fully committed to murdering her target, however, she foregoes all stealth and caution, hunting them like a frenzied predator, with any bystanders crossing her path becoming collateral damage.

Little is known about her besides that she lived in an unnamed city in Mahoning County, Ohio and used to attend classes with the pizza guy. She was employed at West End Laundry and was frequently subjected to abuse by her boss, Louis Kennedy, who had a reputation as a philandering sleazebag. At some point, Samantha became pregnant and though it's never specified who the father was, it's heavily implied to have been Louis, as he had a well-known proclivity for younger women.

One fateful night, Louis locked her in the office and set the whole place on fire, apparently hoping to kill her to hide the pregnancy and make it look like a random act of arson. Despite rescue services not finding her remains, Samantha was officially declared dead. In actuality, she had survived, at the cost of her baby and suffering disfiguring burns all over.

The whole ordeal caused her to snap, tracking down and killing Louis in the following weeks, before going into hiding in the abandoned ruins of her former workplace, even after another one, Spin Cycle Laundromat, opened up right next to it. Seemingly out of a mixture of resentment, jealousy and genuine insanity, she began targeting pregnant women in a killing spree, brutally slicing open their stomachs and ripping the fetuses out of their wombs. She then further mutilated the bodies in satanic rituals, going as far as to hang and sprawl at least three of them around her hideout, which was decorated with mock-up toddler items and mannequins. She kept at least four of her victims imprisoned at the laundromat, where she tortured them through various means. Once the mothers were killed, the fetuses were skinned and used as sewing material, with their flayed remains being kept inside washing machines. To further haunt and disturb visitors of the plaza, she would sometimes make ghastly howls in the middle of the night, in a poor imitation of a child's crying. The prolific serial killings lasted years, but remained undetected, as it was assumed that many of the missing women simply skipped town for greener pastures.

In early autumn of 1985, some weeks before the events of Bloodwash, she started dumping some of the bodies in the open, thus alerting the public to the presence of a serial killer, dubbed "Womb Ripper" by the press.

As Sara goes to wait by the bus station, a suspicious blue car stops dead in its tracks across the road, remaining unmoving until the bus arrives. The same car later appeared at the plaza, parked in front of the old laundromat.

While Sara was waiting for her clothes to get dry and browsing the plaza, Samantha snuck into the employee's section of the new laundromat and murdered the attending clerk, planting his body on the office ceiling. She then hides in a stall in the men's room, sometimes placing items around the laundromat and calling a nearby phone to frighten Sara, who soon discovers the corpse. She calls 911 and while the signal breaks off, the dispatcher sends a patrol car to her location.

To get rid of the potential threat, Samantha padlocks the laundromat entrance and with her victim trapped, she breaks into a neighboring income tax office, slaughtering the night-shift staff. The commotion is overheard by the arriving policeman, Officer Burton, who checks out the building and finds her joyfully holding a bloody fetus, presumably freshly taken from a pregnant staff member. She briefly makes eye contact with the stunned officer, before the power is cut, with her disappearing in a flash. She eventually finds a surviving worker begging Burton for help, killing the former, then locks the officer in a room. Burton attempts to escape through the vents, but she continues to stalk his movements below and tries to stab him with a spear, screeching incoherently while doing so. When Burton finally reaches an exit shaft, Samantha pops out through it and murders him.

Samantha returns to the laundromat where she murders a patron and displays his gore on the washing machine aisle, along with a recording of her crooning a lullaby in a unhinged pitch, before setting her sights on Sara, who flees into the old laundromat. After a game of cat and mouse, Sara manages to lure Samantha into a final showdown in her own lair, parrying her attacks with a gun she took from Burton's corpse. It takes four direct shots into her torso to take her down. From the clues she's gathered, Sara finally identifies the Womb Ripper as Samantha Rhodes, with the shocking revelation making the news within hours.

The same night, her lifeless body is transported to a morgue, where she is examined by a coroner named Doug, who notes that the first shot alone should have killed her immediately. During the following autopsy, the lights go out, forcing Doug to leave momentarily and fix the power. A hideous scream echoes through the halls shortly after and upon returning, to his shock, Samantha's corpse was gone. Before he could leave, Samantha appeared from a morgue cooler and killed him.

Samantha in the income tax office, holding a fetus. 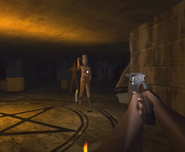 Samantha's body in the morgue