This page displays various projects/concepts that were discarded or were later remade into different titles. Little is known about these projects, as they weren't advertised on social media often, did not receive much attention, and/or most likely did not have a title.

This was one of the Power Drill Massacre HD Project concepts. The concept was advertised on Facebook (including pictures of what looked like a Walmart building) but received little attention. It was quickly dropped. In 2017, the concept was reused for Meat Cleaver Mutilator.

There used to be a short video on Facebook, displaying a demo of a woman exploring a motel. The game used tank controls and had fixed cameras. Not much is known about the project itself.

This was one of the Power Drill Massacre 2 concepts. The concept was advertised on Facebook and Twitter, with pictures and videos of a female child, fleeing from the Killer. The posts gained attention by fans, as they generally liked the idea of a child having to survive on their own. Some fans found the media controversial, due to a child being forced into such a violent situation. The project was discarded, but a video of Version A was reposted on Twitter, on November 27, 2018.

There are 2 versions of this project.

This version had a short development. The project experimented with platforming, and physics. The Killer was capable of jumping in this version. The girl in this version was around the age of 9-12 years old. The environment used was a green debug scene, with ladders, and platforms scattered around the map.

This version had a somewhat lengthy development. The project was stealth-oriented and focused on hiding. The Killer wore a headlamp, along with his normal attire. The girl in this version was around the age of 12-15 years old. The environment seemed to be modeled closely to the original Power Drill Massacre building, but larger, with higher detail.

After the release of the second part of POBS, Puppet Combo started working on an untitled mod for the game and shared a couple of screenshots as well as short gameplay videos over the course of it's development. On the 4th of January 2020, Puppet Combo uploaded some environmental footage and a plot synopsis of the supposed mod[1]:

"A mail carrier has vanished en route to Torport, a small north Alaskan village. Radio and phone lines are down. it's as if it's disappeared off the map. State Police assemble a small rescue squad to investigate. Are they prepared for what they'll find?"

Based on the footage shown, the mod played out the same as POBS, it also took inspiration from John Carpenter's 'The Thing' (1982). The mod has supposedly been shelved and/or cancelled. It is unknown if Puppet Combo will ever decide to pick up the mod again.

On September 19, 2019, Puppet Combo uploaded on his Twitter page short video of a bleeding woman in a wedding dress wielding a kitchen knife and walking up the stairs, alongside a context describing the Bloody Mary legend[2]. Not much is known about it because it was never mentioned or advertised ever again, meaning it was most likely scrapped in favor of other games. 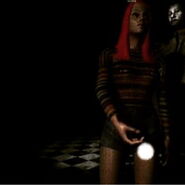