The Mutilator is a very tall adult male of unspecified age. His attire consists of a brown wolf mask, a red jumpsuit, brown gloves and brown work boots. In his right hand, he wields a meat cleaver to slice and mutilate victims with.

When alerted, his eyes will light up bright red, forming beams that act like spotlights as he chases the player down. He will also vocalize in high-pitched whining, much like a dog or wolf would when stressed.

No background is provided for the Mutilator. He is a homicidal, self-styled butcher found wandering and possibly inhabiting an abandoned multi-story building in an unknown location. He behaves territorial and will aggressively hunt down those within his domain like prey.

A single note which can be found in the entire game holds information which might be vaguely related to the Mutilator's past in some way.

His latest and only known victim, Janet, briefly brings up the possibility that the Mutilator might be part of the audition she signed up for, with the entire event perhaps being nothing more than one elaborate film shooting. This is ultimately never disproven nor confirmed.

The Mutilator will start off in a certain location every time the game first starts up, from where on he will proceed to wander around the building in search for his prey. He will only deviate from his patrol routine if he detects Janet's presence, whether by making visual contact or becoming alerted by the sound of her running (The Mutilator has sensitive hearing when close by and will investigate the source of noise). Rarely, the Mutilator can hide in dark corners so that he may catch you by surprise, though the only spot he seems to hide in is located on the ground floor in the main store section.

In a scripted event, he will charge Janet from a corner as she reaches the exit door, but is killed by his would-be victim, putting a stop to the hunt.

The Mutilator standing in a corner 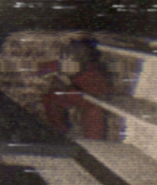 The Mutilator couching in a corner in the store section

"I can see you."
Community content is available under CC-BY-SA unless otherwise noted.
Advertisement