Puppet Combo Wiki
Register
Don't have an account?
Sign In
Advertisement
in: Stay Out of the House, Enemies, Antagonists

Stay Out of the House

The Baby is an antagonist and a hostile enemy in Stay Out of the House.

It's a small humanoid creature the size of a toddler. It has a large head, large black eyes, reddish hairless skin, it crawls on all fours, and it can open its jaw really wide. It makes high pitched noises. Its exact origins are unknown besides that it's a member of the Abductor's family and it resides in the killer's house. It has its own room with toys and a baby bed. It can attack the player.

The Baby becomes active on the second day once the player has accessed the attic area. It inhabits the vents and unlike the Night Shift Abductor who will immediately attack the player, Baby however will stay still and observe. If the player approaches it, Baby will either crawl away or will attack by biting. Baby can also appear unexpectedly in the vents. Players can defend themselves against the baby with a kitchen knife. If the players point gun at it, Baby will crawl away really fast. Baby can also exit vents and will wander the house.

Baby can also be seen watching the player from the vents at certain points in the game. 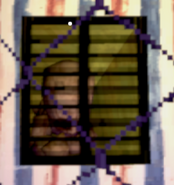 Baby in the vents

Baby charging at the player