Santa, or sometimes referred to as the Red Demon by some of the characters, is the titular killer and main antagonist in Planet of Bloodthirsty Santa.

"Santa is constantly appearing in the village in the dead of night. He stays somewhat quiet... just wandering the alleys. I've seen him looking around... peeking through windows, following elves home. He's freaking us the hell out. I mean... Santa is the nicest guy. He's never done anything... Not that we've heard. He may be acting strange, but I know he'd never hurt us..."

- One note that was written by the Elf, describing Santa's behavior.

Santa lives in his large castle on the planet where the game takes place. He wears his iconic Christmas suit that's splattered in blood from slaughtering elves. His left eye is white while the other one is black. He uses an axe to kill his victims. Before his murderous rampage, he was described by the Elves as the nicest in the village.

For some unknown reason, before the scavenger crew landed on the planet, Santa slaughtered village of Elves. Before that, as mentioned in some of the notes that were written by the Elves, Santa started behaving strangely which scared elves. One note mentioned that one of the Elves went to Santa's castle and never came back. Those Elves were imprisoned, tortured, and abused by Santa, and over years, they mutated and became bloodthirsty demons. His reindeer also suffered the same fate as elves. Santa decapitated reindeer Rudolph's head and used it as a searchlight.

Santa spawns randomly in the village and attacks the player. To escape from Santa the players must run as far away from him. Once the player has reached a certain distance, Santa will stop chasing the player. It is suggested in one of the notes written by one Elf that Santa's searchlight must be avoided. After the players have collected all four minerals, Beth is contacted by Susan who in panic informs her that something is on the ship, indicating that Santa has sneaked on the ship and started slaughtering the crew. Beth returned to the ship to find out that Santa killed both Jackson and Susan, and badly damaged ship. Following this, Santa returned to his castle and released reindeer into the village. 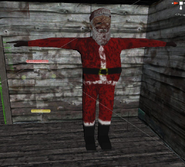