Much like the original Power Drill Massacre but in 8-bit style, the game follows Megan who after getting in a car crash, flees through woods to get help for Jeff and takes shelter in an abandoned factory, which turns out to be a lair of a killer.

The game plays similarly to the Atari 2600 games: Adventure and Haunted House. The player controls Megan, as she explores the layout of the abandoned factory building, and collects many keys, in order to transition to the next level. There are shutter doors scattered across the building, that the Killer may spawn from. The player must avoid getting near the shutter doors, and flee from the Killer if he spawns. The player is given 2 lives at the start and is able to collect extra lives (similarly to Minotaur) scattered across the map.

Megan finds herself in the Killer's lair. (from Ending B of the original Power Drill Massacre). Megan flees from the Killer, and enters a long hallway (similarly to Ending A's hallway, though the arcade hallway is not as linear). She manages to escape the building, and drive away in a pickup truck parked nearby. The text is displayed afterward.

"Megan has suffered an emotional shock. She will recover in a crisis center. You win."

The game ends, and transitions back to the title screen. 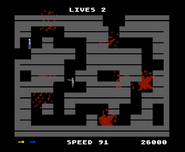 The only appearance of Jeff In-game