Meat Cleaver Mutilator
Power Drill Massacre, a remake of Minotaur, is a 2015 survival horror game developed by Puppet Combo. The game is available for download on Puppet Combo's Patreon and Itch.io pages.

In 1987, Megan and her boyfriend, Jeff, get in a devastating car crash. Megan soon seeks for help since Jeff is unable to move. Megan stumbles across a factory and decides she can ask for help there. She soon realizes she is trapped in the factory with a crazed killer wielding a power drill. Can Megan survive the Driller Killer?

After escaping a car crash, the player goes and looks for help with a flashlight from the trunk of the car. After looking around the area, you see a factory and decide to go inside. Once entered, the door behind you locks. The player is then forced to find a way out while avoiding the Driller Killer. Eventually you find a door that needs to be unlocked, and the door contains three color painted keyholes. The player can find these colored keys, or alternatively go through a maze called the Sugar Tunnel. Every time the player dies, the keys spawn in a different location. In some areas, there are articles the player can read; these articles talk about different missing victims (Doesn't affect gameplay, just cool to read).

Ending A (True Ending/Update Ending): After the player (Megan) gets the three color keys and unlocks the exit door, the player sees a girl running down a long, dark hallway. Once the hallway turns red, the girl stops and the killer attacks Megan. Running down the hallway, the player gets chased as the killer's screeches get louder and louder. The hallway will get brighter and slow down, until the screen turns white. A radio has audio of the killer screaming in frustration due to Megan successfully escaping. After that, the audio cuts to a news report saying that Megan and Jeff are both missing, after the radio you can hear screaming by an unknown person and you can see the moon and the mountains getting darker. After that, the game ends and closes itself.

Ending B (Bad Ending/Original Ending): Instead of the player getting the three color keys, the player can go down the maze called the Sugar Tunnel. In the maze, there are lots of flashing images and the player is stuck in the maze with the killer. At the end of the maze, the player has time to investigate what appears to be a lair. In the lair, there are human/dog cages, corpses, kids drawings, broken toilets and a piano. After investigating or running out of time, the player is caught by the killer. This time, the player is not killed, instead Megan is trapped in a cage. As Megan is crying, the killer went to check on Megan, causing Megan to scream. The killer attempts to communicate with Megan, however it seems that he is too far gone and mumbles only gibberish. He puts down a music box playing the ending music. After the music has stopped, the killer then runs toward Megan and kills her. The game ends with this text.

"AND DEATH AND HELL WERE CAST INTO THE LAKE OF FIRE. THIS IS THE SECOND DEATH"- REVELATION 20:14

The game then ends and closes.

These are messages from multiple newspapers and notes that can be found around the factory. (Typos Included as to not alter the original text)

An old teaser image made for PDM 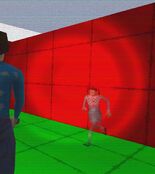