The Nun is the titular killer of Nun Massacre. She is also in the novelization of the game.

She's a freakishly tall nun with her eyes gouged out, crying black down her cheeks, who haunts an abandoned old Catholic Boarding School and attempts butchering the player, Mrs. McDonnell, with a kitchen knife. When she spots Mrs. McDonnel, she lets out her horrifying screams as she attempts to catch and kill her.

While the player is walking towards the boarding school, the Nun could be seen in the distance before vanishing. Inside the school the Nun patrols the halls and rooms. To avoid being spotted by her, the player has to stay out of her sight, hide under beds, avoid making noises, and avoid using light sources when she's around. If the player is spotted, the Nun will give the player a chase, forcing the player to run as far away from her or to hide under a bed. Also, the vents are not a safe place because the Nun can also navigate through them. If the Nun spots the player hiding under the bed, she will flip the bed over and attack, making the bed useless afterwards. If the player falls into the barbed wire pit, they will get stuck and won't be able to move, if the player waits long enough without looking around fast, the Nun will then appear, whispering, after a few seconds she will start stabbing the player, killing them. She is able to hide behind doors, getting too close to that door will make her bust through it and instantly start a chase.

In the good ending, Mrs. McDonnell finds herself in a room, along with the Nun who is trapped in a cage. McDonnell pours the cage with oil and sets it on fire, killing the Nun.

After navigating through the ventilation system, Mrs. McDonnell falls into a room and is unable to get out. Soon the the Nun appears and starts filling the room with her acidic vomit, killing Mrs. McDonnell.

Hiding under the bed from the Nun

The Nun's Attack Animation in a very early, unreleased version of Nun Massacre.

Nun in the vents

Nun trapped in a cage 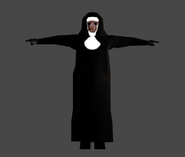 Front of the Low poly model of the Nun 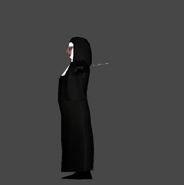 Right side of the low poly model of the Nun 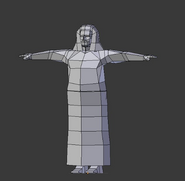 Model of the Nun without the Textures on it

Nun on the VHS cover

Nun visible on the book cover
Community content is available under CC-BY-SA unless otherwise noted.
Advertisement