Puppet Combo Wiki
Register
Don't have an account?
Sign In
Advertisement
in: Stay Out of the House, Characters, Killers,
and 3 more

The Night Shift Abductor, or sometimes referred to as the Butcher, is the main antagonist in Stay Out of the House and Night Shift.

In disguise, he wears pants, shoes, a black-red shirt, heavy rubber apron splattered in blood, gloves, burlap mask, and uses a sledgehammer to knock people unconscious. At some points in the game, he was observed using a meat cleaver, and a chainsaw.

In Night Shift, he supposedly works alongside another man who checks the gas stations before Butcher can ambush the workers.

He drives a van and stalks his victims during night time before ambushing and taking them to his house, thus he was given the name Night Shift Abductor by the media. His victims are kept in large cages inside of his house and in his backyard. The victims are either killed by him or are left to starve to death.

The house he lives in is relatively old, with barricaded windows and doors, junk scattered all over the floor, rats running around, walls covered in mold and paint falling off. Number 666 and many pentagrams can be found on walls. Butcher is also member of CFV.

His backyard is surrounded by a large fence that's preventing his victims from escaping. Underneath his house is a large bunker where he keeps some of his farm animals, and something horrific.

The text in the newspaper article written about him reads:

Mill Creak, OK - The gruesome realization of the incompetence of our once trusted police force shines its head, once again, after the sixth in what can now be considered an undeniably connected series of kidnappings from late-night shops and 24 hour restaurants across a large portion of Western Oklahoma.

As of last night, 34 year-old Debra Kopiske is the latest victim of notorious Night Shift Abductor that has had a considerable presence in terrifying our communities over the last four weeks. Though initially thought to be unrelated disappearances, three locations show video evidence of the same abductor at multiple locations between Quarter Country and its surrounding areas.

All six abductions have had similar circumstances: typically the employee was alone on shift in the dead of the night and was confronted by the assailant after a period of observation, when the venue was at a period of little to no business. The victims were assaulted via a blunt object before being rendered immobile of unconscious and being removed from the store into what can only assumed to be an unmarked vehicle.

Though only three moments of video evidence have been provided, the police and state investigators have finally conceded that this string of kidnappings were likely all performed by the same assailant. The Night Abductor. (cut off text) the, as the moniker has been provided, is a large built adult male. Assumed to be in his mid to late thirties, standing roughly 6'4 and an assumed 250 pounds. Very few details of the assailant are known, as his identity is well concealed during the assaults via a makeshift burlap mask and thick, seasonal clothing. A definitely odd feature is that the kidnapper also has been noticed as wearing a huge rubber apron at the scenes of at least three of the six apparent kidnappings. A police sketch-artist has made a rough look of the assailant's appearance, and are asking anyone in the public who see this man report his whereabouts immediately to your local officials.

Police and the public should be on the lookout for anyone matching this notably odd appearance during any late-night outings they may be on, as the habits and patterns of the abductors crimes are not fully identified, but make no mistake: These incidents do not appear to be slowing down. How much longer are we to expect this slow, unproductive case to continue? With no little evidence to be shown after such a rash and violent (cut off text) attacks have been continuing, it brings to light that...

After a suspicious customer has left the gas station, players hear a door open in the back and go investigate it. The butcher will either attack them outside or inside the store, resulting in game over.

Stay Out of the House[]

In the prologue when the player enters the house and heads into the basement, they are ambushed and knocked unconscious by the butcher. Butcher can also appear outside the house near the ruins and will attack the player.

The Butcher patrols the whole house and sometimes leaves bear traps on the floor. Any time the butcher spots the player, he screams out loud and attacks with a hammer. To avoid being spotted by him, the player has to stay out of his sight, avoid making noises, hide under the beds and avoid his traps. If the butcher spots the player hiding under the bed or under the table, he will flip the bed/table over and attack. The Butcher also reacts to light so the player needs to be careful when using the lighter. If the Butcher sees the player in the ventilation system (this can either happen if the Butcher spotted the player getting into the vents, or if he spotted the lighter on), he will release the gas into the vents, forcing the player to get out of the vents. At some point in the game, the Butcher cuts off Brendan's head with a chainsaw.

If the player is spotted by the Wheelchair Lady, the Butcher will respond to her screams and immediately run towards the room she's in. If the players kill Wheelchair Lady and the Butcher sees her corpse, he will start screaming and will flip beds and tables. On the second day, Butcher will install security cameras inside the house. When the camera spots the player, it will alert Butcher.

Players can also use beartraps against the killer. If the Butcher steps on a beartrap, he will drop on his knees and will start screaming while trying to free himself, giving players time to flee. If players get close to him, he will try to hit them. After certain amount of time, Butcher will free himself and continue searching for the player.

If the player shoots him with the pistol or stabs him enough times with a kitchen knife, the Butcher will run away and lock himself in a room with metal doors that the player cant access. After a certain amount of time, he will leave the room and continue pursuing the player. Once the player exits the house into the backyard, the Butcher will turn the stadium lights on and start patrolling the backyard. From that point on, Butcher will start taking corpses from the backyard, impaling them on a meat hook, and dismembering them piece by piece. 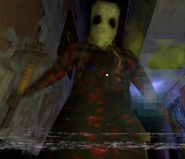 The Butcher about to attack Roxanne, with the gas in the vents still on.