Puppet Combo Wiki
Register
Don't have an account?
Sign In
Advertisement
in: The Night Ripper, Characters, Killers,
and 2 more

The Night Ripper is a slim, reasonably tall man, who wears an all black outfit consisting of a buttoned-up long coat, shoes, gloves and a Homburg hat, as well as a yellow duck mask. He wields a flashlight in one hand and a switchblade in his other to slash his victims.

Unlike most killers, who have no preference in victim and murder indiscriminately, the Night Ripper fixates on prostitutes. Coupled with his targeting of Rachel, despite there being no indication of her being a call girl, imply a sexist stance on women. He still seems to hold a considerable sense of self-preservation, unseen with the majority of other killers, as a single gunshot aimed in his direction will send him running, but will remain persistent in his pursuit of her all the same, showing that, while he can be dissuaded momentarily, he is obstinate about his objective. A particular mangled corpse found in the later stages of the game indicate that failing to immediately take Rachel out has hurt his pride and thus made her death a matter of personal principle for him, even devolving by skipping over his usual methods and rites to let out his frustrations through a marked increase in brutality.

He's a misogynistic Jack the Ripper-esque serial killer who preys on the population of New York City's slums in 1981. His modus operandi consists of tracking down viable targets, which have been exclusively female, primarily sex workers, in a black sedan in the dead of night, viciously assaulting them once close, usually killing via stabbing using either a knife or other sharp weapon, then peforming in violent necrophilic intercourse with the corpses before dumping their bodies in secluded, but public locations like dumpsters or back alleys. He is known to imitate a duck's quacking during the attacks, in reference to his mask.

His gruesome deeds have garnered a significant amount of attention since his discovery some five weeks back, although recent findings suggest that the span of murders may have already began in August last year and his hunting grounds could reach as far north as Greene County, having becoming a high-profile case, leading to an, as of yet, unsuccessful manhunt by the city's entire police force, all the while leaving notes and photos as clues and catty derision for the NYPD to find. Some went as far as moving out of the city in wake of the crimes, but a number of natives to the area remain out of pride and refusal to give in to the newly created climate of fear.

On the 5th of August, 1981, in the midst of the Night Ripper's killing binge, he catches sight of Rachel, an after-hours commuter, and assumes her to be a prostitute on her late-night walk home, and thus relentlessly hunts her in his infamous black sedan, sometimes tailing her on foot, patrolling crack dens and seedy neighbourhoods for Rachel and other potential victims. The Ripper murders a hooker he incidentally finds during his search, savagely beating and maiming her with a glass bottle, but loses track of Rachel after she successfully flees into her apartment. What follows is left purposely unclear, but in the after-credits scene, a window is heard shattering, implying the Night Ripper has forcibly entered the flat, still determined to finish Rachel off.

Throughout the game, there's a DJ heard over the radio trying to justify The Night Ripper's actions, describing him as a righteous vigilante and fulfiller of conservative justice. It's heavily implied the DJ is the Night Ripper's public alter-ego. An unattended radio broadcasting station found within the confines of his territory further cement this theory.

If true, his motives can be gleaned from his rantings while on air. He is seemingly mission-oriented, with the goal of ridding the world of prostitutes, punishing them for their perceived immorality by engaging in fornication and using drugs, attributing the rise of moral corruption, sinful behaviour and homosexuality to their presence, making himself out to be a modern day crusader delivering redemption upon NYC, when he's little more than a chauvinistic moral entrepeneur with an unspoken messiah complex. This either stands in conflict with or is a cover for his necrophilia, which, along with his visible reveling in the exposure he has been receiving from the media for his atrocities, point to sexual hedonism and attention seeking as likely being his actual reasons for killing.

During the game, four newspaper scraps are found reporting on the Night Ripper's crimes. Articles are being shown in order of appearance:

"PANDEMONIUM SPREADS AS THE BODIES OF SEVERAL PROSTITUTES ARE FOUND"[]

BEDFORD - Some local men have made a shocking discovery, causing panic to spread throughout the city. A young woman has turned up dead, the body dumped in a back alley.

Upon discovery, the men immediately called the police. A source has identified the body as a local prostitute, whose name was not yet leaked to the public. Police cordoned off the area searching for more remains.

One woman who survived an attack on Tuesday, claimed to not have seen the assailant's face, but told the police that he drove a black sedan. It has also been revealed that the prostitutes were murdered with a switchblade. As the week continues, many are hiding in fright as all are tended to see if the killing continues."'

"GRIM ATMOSPHERE CONTINUES AS THE "NIGHT RIPPER" CONTINUES HIS ONSLAUGHT"[]

BEDFORD - The unsettling atmosphere that fell over the city last week hasn't lifted with the discovery of more murdered prostitutes. The killer, now known as the "Night Ripper", has shown no signs of stopping his killing spree now.

Many had hoped that this terrible slaughtering wouldn't continue on, but with new evidence it doesn't seem that way. What's more is that the Night Ripper seems to leave notes taunting the police.

"We'd like the city to stay as calm as possible," says the local police chef. "The Night Ripper will be caught before (cut off text)"

BEDFORD - A third body has been recovered from the BEDFORD warehouse district after a night worker noticed a foul odor coming from a shipping container and called 911.

The county medical examiner has identified the body as that of Lisa Mueller, 24, who was know to police on account of multiple previous arrests for prostitution.

Following an initial investigation of the crime scene, Greene County police strongly believe that the killings are all the work of a single party.

"Our medical examiner determined that the body had been there for a least three days", said Greene County sheriff Paul Tanenbaum during a press conference last Tuesday. "The body also bore signs of a violent sexual assault, likely postmortem. The others two bodies we've found in the last month share this characteristic, as well as all having a history of prostitution. At this point in the investigation, we believe that one person is behind all of these horrifying murders."

As the investigation into the crimes continues, police continue to claim that there is no danger to the general public.

"ANOTHER WEEK HAS PASSED, YET THE NIGHT RIPPER HASN'T BEEN CAUGHT"[]

BEDFORD- It has been five weeks since the first confirmed Night Ripper slaying and more serveral [sic] more victis [sic] have come to light since. Some now confirmed victims were first reported missing as early as August.

Many have left the city in fear of them being next, yet some remain. When speaking one local that remains, she responded, "This is my city and I won't abandon it for someone who thinks he might be doing justice or cleansing the world or some shit. I was born and raised here and I'll die here if I need to." Those who remain share the same reason that the young local has, as they refuse to leave the (cut off text)." 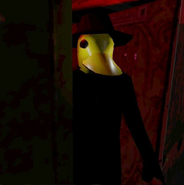 Night Ripper inside a crackden

Inside of the building searching for Rachel

Killed by the Night Ripper.