Neokalus Burr is the main antagonist in Babysitter Bloodbath, the game's novelization of the same name, and the intended player character of the cancelled Sanitarium Massacre and A Monster With Eyes Of Ice. He is an expy of Michael Myers, the villain of the slasher horror franchise Halloween.

Neokalus is a towering hulk of a man. Raven-haired, he is clad in a red boiler suit, wears black gloves and grey shoes, dons an undersized pink clown mask, and uses a kitchen knife to kill people. According to radio transmission, he's 38 years old, approximately 6'4" (193 cm) tall, and weighs 240 lbs (108 kg).

Neokalus Burr was a serial home invader, with a long rap sheet of hot-prowl burglary and an uncharacteristic violence against occupants, as well as an extensive record for mental illness, dating back as early as age 16. Declared criminally insane, he was locked away in a sanitarium for a permanent stay.

In the unfinished Sanitarium Massacre, the lore has Burr gunned down by police following a break-in and leads to him being institutionalized for life. After 8 solid years spent in a near-catatonic state, his inner demon resurfaces, causing him to snap, escape his cell and wreak havoc upon the staff with his trusty handy-dandy soulmate-ish butcher's knife.

A Monster With Eyes Of Ice[]

Another unreleased game, A Monster With Eyes Of Ice, is a direct sequel to Sanitartium Massacre, in which Burr terrorizes the local neighbourhood shortly after leaving the asylum, breaking into homes and slaughtering their residents.

Though not offically recognized, it is very possible that these game serve as prequels to Babysitter Bloodbath, and that Burr preyed upon Sarah just hours after finishing up the massacre at the hospital and possibly while in the midst of a killing spree targeting the surrounding area.

Burr, described as a disturbed patient from a Monroe mental asylum for the last 22 years[1], is reported over radio as a recent escapee of Lincoln State Hospital, with local residents being urged to stay inside and keep a lookout for suspicious individuals matching his decription. Meanwhile, Burr immediately begins stalking the nearby suburbs, eventually setting his focus on the Johnson house. Inside, local teenager Sarah is babysitting Billy, the son of the household, for the night while his parents are out. Shortly before his arrival, a cryptic phone call reaches the landline, apparently made by Burr to announce his coming.

After putting Billy to sleep, Sarah decides to invite over Jack, a boy she had met at the mall, to keep her company and watch a movie. As she goes to help herself to a beer in the kitchen, she hears Burr staking out the home from the backyard and sends Jack to check out the noise, who, although reluctant, steps outside into the darkness, an ear-piercing scream following suit. Alerted by this, Sarah goes after him, finding Jack stabbed to death and skewered to the fence with a screwdriver. Burr then reveals himself and lumbers towards her, knife in hand, following Sarah as she flees back into the house. From there, Burr wanders the rooms looking for her, while she attempts to get the Johnsons' car in working order. Burr ambushes Sarah in the garage as she tries to use the car and the two engage in a face-off. His rampage is put to a halt when Sarah manages to take him down with multiple revolver shots and axe swings, allowing her to escape to the police station with Billy. Sarah is praised for her heroism by Lt. Breaker, before being informed that by the time the authorities arrived, Burr's body was nowhere to be found, meaning she will have to be put under surveillance at the hospital for her safety.

The 2020 novelization of Babysitter Bloodbath takes numerous creative liberties in fleshing out the story. Amongst these changes, several details contradicting the game's canon background for Burr arise. 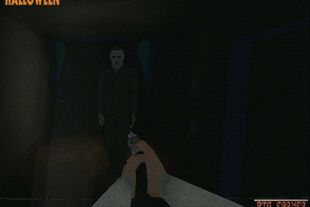 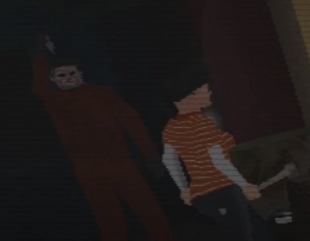 "It was at this moment that Sarah knew she fucked up."