Return to the catholic school

Mrs. McDonnell is the main protagonist of Nun Massacre.

What little is seen of Mrs. McDonnell reveals her appearance as a short woman with green or grey eyes, long, brown hair in a bob cut style with bangs, and is seen wearing something that can only be assumed to be an orange dress with purple long socks and black shoes and she appears to have a grey necklace. Mrs. McDonnell can be assumed to be semi-athletic, as the player is able to get her to run at a rather quick pace for a long period of time before the stamina bar runs out.

Very little is know about her besides that she was catholic and had a daughter Janie. It's unknown if she was a widow or was she divorced. According to many notes that can be found in the game, at some point (possibly somewhere in 50's) Mrs. McDonnell sent her daughter Janie to a catholic school where she was treated badly, and was abused by Mother Apollonia. Janie then got terribly sick and Mother Apollonia sent a letter to Mrs. McDonnell informing her about her daughter. A letter arrived while Mrs. McDonnell was having a bath. After reading the letter Mrs. McDonnell went to the school to pick her ill daughter. According to notes and VHS tapes, Janie committed suicide.

Many years later (somewhere in the 70's or the 80's) Mrs. McDonnell returned to the now abandoned school to reconcile with her daughters death.

At the beginning of the game, Mrs. McDonnell is having a bath while listening to radio. After hearing a letter slide through the letterbox, she got out of the tub to get the letter. This was followed by a flash of light and Mrs. McDonnel appeared standing next to a car in the woods during a stormy weather. Because the road is blocked, she had no choice but to continue on foot. When arriving at the boarding school, a Nun could be seen in the distance, before vanishing ominously. As she enters the boarding school, she finds that the atmosphere of the school is dark and quiet. No sooner than her first moments in the building, is she met by a deranged Nun who patrols the halls and rooms of the place. Mrs. McDonnell explores the school while avoiding the Nun.

Mrs. McDonnell gets trapped in a reality-bending vent, and is killed by a small humanoid figure made of light.

Mrs. McDonnell slays the Nun by burning her alive, and is forgiven by Bongo the Clown. A staircase appears and Mrs. McDonnell climbs it towards the light.

Mrs. McDonnell gets herself trapped in a room that the Nun proceeds to fill with her acidic vomit, killing her. 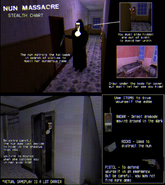 Mrs. McDonnell hiding behind a wall in the top right corner photo
Community content is available under CC-BY-SA unless otherwise noted.
Advertisement