Larry is the playable killer and villain protagonist in Blood Maniac, and Christmas Massacre, as well as the intended player character of the demo game Texas Butcher.

Larry is an adult Caucasian male with short, dark brown hair. He is very tall and visibly overweight. He wears a wide variety of costumes and masks throughout his appearances.

In Blood Maniac, Larry starts out dressed in a cream white one-piece pyjama with a blue dotted pattern, blue gloves, and white socks. Notably, he is unmasked, but his face is seen completely pixelated.

In Texas Butcher, Larry dons his Baby outfit with a baby mask, a white shirt, and blue overralls. As a child, Larry wears a horse mask and is wearing nothing other than his underwear.

In Christmas Massacre, Larry dons a Santa Claus mask, a filthy Christmas hat and a classic red-and-white Santa suit, drenched in copious amounts of blood. At the start of the game and the beginning of each day, he wears only a white pair of underpants, his mask and his hat.

Larry is best described as an overgrown baby and literal manchild. His most notable trait is his delusional mindset, making him heavily disconnected from reality, with his fantasy usually blending over what is actually happening. Having always has been a trouble's child, Larry never moved on from this state, even as an adult, remaining oddly childlike, almost infantile at times, living in a cluttered house with numerous TVs constantly running, having imaginary friends, who are really extensions of himself and his twisted desires, and ostensibly playing dress-up in preparation of or while committing his murders. Though he possesses the capacity to drive a car during his crimes and makes use of sneak tactics while invading homes, his apparent motivation for killing is typically impetuous, either in petty revenge for minor slights or justified reactions to his unsocial behavior, and following simple-minded logic of ridding the world of people he perceives as "bad" or, during Christmas Season, "naughty”, though the Game Over screen implies that Larry is, to some extent, aware of his own hypocrisy, noting that by getting caught during his crimes, he too has become guilty of "naughtiness".

According to Texas Butcher, Larry was born and raised in a strict, Catholic household somewhere in rural Texas. He seems to have had a convoluted relationship with his temperamental mother, who apparently thought no woman would ever want to marry him (although this did not discourage her from lashing out at her son for his celibacy), had an aunt named Claire (likely his mother's sister) and relied mostly on his pet dog, known as Doggy, for companionship. At some point during his childhood, he was sent to a Catholic boarding school, where he committed his first murders on Christmas Day, 1959.

Larry is creeping through the hallways of the mental hospital he's institutionalized in, sneaking to the reception and using a make-shift shank to kill the two night-shift attendees. From there, he escapes and starts slaughtering everyone in town. Once outside, he stabs a police officer who tries to stop him to bits, then enters a nearby convenience store, murdering the night-time staff. He steals a van to drive to a slumber party, where he lays waste to the unsuspecting guests. At the end of his slaughter, Doggy appears before Larry to congratulate him, but reminds him that his work is not done yet and that he must go out to search for more victims. This effectively marks the ends of the game, as all available targets are eliminated.

Throughout the game, you can find outfits around the map:

During a flashback sequence to December 25th, 1959, a young Larry is told by a nun that he cannot attend the Christmas Party for unspecified reasons. Upset by this, he sneaks down into the kitchen, where he takes a kitchen knife and goes to the party anyway. Instead of celebrating the festivity, he wounds the head nun and attacks the dancing crowd, killing all of the partygoers.

Some 20 years later, on December 23rd 1979, Larry is told by his Christmas tree to kill "naughty people". He does so over the course of 5 days, breaking into several house parties and a convenience store, murdering dozens with the knife he's kept since the school massacre.

During one of his outings, Larry has vivid hallucinations including images of walls of fire, chattering teeth and his dead mother.

On New Year's Eve, the tree wakes Larry up at night and urges him to return to the school to burn it down. Equipping a flamethrower and burning down the main building along with numerous nuns and children, he confronts the aged nun at the chapel, who had survived his first massacre, although now missing her lower half and confined to a wheelchair. She cusses Larry out as he sets fire to the hall, before he beats the nun into a pulp. Upon returning to his house on New Year's Day, he is ambushed by an unit of Texas Rangers. To his shock, his tree tells him that he sold him out, claiming that he head no choice but to cooperate with the FBI. He is taken into custody and charged with 36 counts of murder.

In the extended ending, 6 years later, on Christmas Eve in 1985, Larry stands in a corner as other inmates of the psychiatric ward dance the night away, then goes off hiding as the orderlies sent the patients back into their rooms. Larry manages to make his way downstairs and kills the attending receptionist, escaping outside, seemingly beginning the events of Blood Maniac.

Larry hiding in the closet, ready to attack a victim. (Blood Maniac) 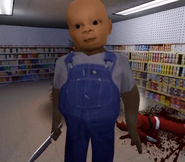 Larry as a child in Larry the Butcher.
Community content is available under CC-BY-SA unless otherwise noted.
Advertisement