Puppet Combo Wiki
Register
Don't have an account?
Sign In
Advertisement
in: Characters, Antagonists, Killers, The Enigma of Salazar House

Isabel Salazar is the main antagonist in the game The Enigma of Salazar House.

She lived in the Salazar Mansion with her husband, Jaime, his grandmother, his brother, their dog and her little baby, named Javier. According to the ending "He is Gone Forever", Javier died as a baby; and one night, Isabel had a dream where she talked with the "Devil". It said to her that she could bring her son back, if she completed a ritual written on the pages of the Black Book in the library. In the blind desire to bring her son back to life, she offered the whole family, including herself, to bring Javier back.

After the ritual, Isabel became a soul that patrols the mansion; holding a candle and a knife, she attacks Elisa whenever she encounters her. 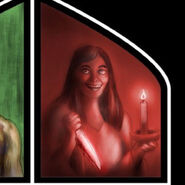 Isabel as in the game's video cover.