The Insane Stranger (simply called "Stranger" in-game) is the secondary antagonist of Day 7.

The stranger is an older Caucasian man of stout build. He was completely bald, had a grey beard, heavily dilated, blood-shot eyes and also appeared to have no teeth, He was shirtless and barefoot, only wearing a pair of blue burlap pants. The stranger wields a handgun in his left hand while hunting for humans.

Very little is known about the Insane Stranger, not even his real name, but much like the other characters, he no-clipped out of reality and appeared in the Backrooms. Due to the scarcity of food and water, he eventually went insane and became a cannibal in order to survive, drinking blood and eating eyeballs of others trapped in the realm for sustenance. It is unknown how long he was stuck in the Backrooms, but given his unreasonable, animalistic condition and the many old blood stains found in various rooms, he must have been living there for much longer than Terrence and Sally.

On his first day, Terrence removes a mask from a wall and looks in the hole behind it, finding the fresh corpse of a police officer at the very back. His blood has been drained and his eyes were torn out. Terrence notices the officer's pistol is missing, hinting that whoever was responsible for his death took it.

The Insane Stranger appears on Day 5. He attacks Terrence and Sally's campsite, shooting Sally dead and dragging off her half-naked body. Terrence is awoken by the bang and goes searching for Sally, discovering the stranger crouched over Sally's corpse, tearing into and ripping out her flesh in ravenous bites. When Terrence yells at him, he turns around and nonchalantly tells him to shut up, announcing that he'll eat him too, before taking flight. The stranger goes after Terrence with a gun, but his prey eludes him after non-fatally puncturing the stranger's chest with a screwdriver. After a game of cat and mouse, Terrence ambushes the insane stranger and plunges the tool into his left eye, killing him. 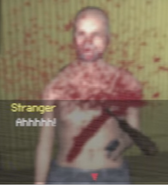