Tom Smith, better known as the Easter Ripper, is the main antagonist in Murder House. He is also in the novelization.

The Easter Ripper, real name Tom Smith, appears to be a Caucasian adult male of unspecified age, height, and weight. He has short brown hair and wears a purple sweater with several colorful patterns on it, blue jeans with a black leather belt, and brown shoes. During his murderous rampage, he wears a worn-out purple Easter bunny suit with a yellow ribbon. His weapon of choice is a large sickle. His mask has traces of dried blood stains around the mouth from several murders, as well as completely blackened eyes.

He seems to possess inhuman strength and durability as he was able to withstand gunshots and lift humans with one arm and kill them by hugging and squeezing them as seen in some death cutscenes.

Not much is revealed about Tom's early life. What is known is that Tom grew up together with his brother Anthony in a large house in the backcountry of Michigan, near the city of Monroe. Tom refers to himself as a "Mama's boy" in one of his lines, implying an overly deep or strained relationship with his mother, not too dissimilar from the Night Shift Abductor or Larry.

In March of 1979, Tom took a seasonal position as an Easter Bunny at a Monroe mall. Taking advantage of his proximity to the younger visitors, donning the costume, he would abduct pre-pubescent children, some as young as toddlers, each Easter and taking them to his childhood home, where he would imprison them inside a secret basement section for several weeks, continually abusing them for sadistic and pedophilic gratification. This included starvation, exposure to the elements, bondage, rape, S&M play, medieval torture, and cruel practical jokes, such as hiding sharp objects inside their limited food rations, which consisted solely out of chocolate eggs, laced with tranquillizers to render the kids easier to deal with. Once he's had enough of them, he would release the children into his greenhouse and force them on a deadly egg hunt, during which he stalked and ultimately murdered them, later burying the bodies beneath the building.

Sometime in late April, 1983, one of Tom's would-be victims, Randy Martinez, escaped and exposed him to the authorities, but instead of him being arrested, Anthony, the legal owner of the house, made a false confession to save his brother's life. Anthony was found guilty of eleven counts of child murder and after spending two years on death row, executed by the electric chair.

Initially, Tom heeded Anthony's sacrifice and refrained from killing during both following Easter Seasons, although maintaining his job at the local city mall. By 1985, however, he found himself unable to keep his murderous urges in check, Anthony's wrongful execution presumably being the trigger. The Easter Ripper reawakened, he started back where he left off and continued kidnapping children at the mall.

One night during the same year's Easter, the Easter Ripper discovered 8-year old Justin strolling around the plaza, with who he had a picture taken just a few hours earlier. When the boy reaches the secluded staff-only area, he gives chase, eventually seizing Justin for grisly intentions.

In 1988, he returned to his former residence, now known to locals as the "Murder House" and generally thought to be abandoned, to find Jerry, a real estate agent, on his property, who had shortly before made a deal with a local news crew to shoot a haunted house story about the legend. Provided with the perfect opportunity, Tom murdered the agent and later joined the TV crew, masquerading as a cameraman. During their stay, he locked down the entire house and destroyed the news van to prevent the team from escaping before slaughtering them one by one as revenge for attempting to further defile Anthony's name. He killed all the crew in horrendous ways:

Dana - Tom sneaks up behind her while she is fleeing and dismembers her hand then decapitates her.

Gary - Cut in half and disemboweled by Tom, later strung up on a chain link.

Tom (fake-out) - pretends to be attacked.

Tom had his last to-be victim, Emma, participate in his notorious egg hunt, stalking her around the house while she collected Easter eggs from dead bodies, which were embossed with Tarot card images, thematically referencing the demise and negative qualities of their "holders".

After Emma collects all 4 Easter eggs and escapes into the greenhouse, The Easter Ripper appears before her and reveals the truth to her: he was Tom, the cameraman. He reveals that he killed the news crew to avenge his brother Anthony, who took his place as the killer and was executed instead, before attacking her. Emma manages to defeat him by shooting him multiple times with a single-barreled shotgun. When Emma goes for the door, Tom reappears, heavily bleeding, declaring that he cannot be killed, but before he can descend upon Emma, the ground starts shaking and all of his murder victims start rising from the dirt and ashes. While Emma runs and manages to escape, the same can not be said for Tom. The children swarm him, shoving him to the floor before tearing him apart and devouring him. As Emma escapes, a bright light appears in the greenhouse before the game ends.

After Emma escapes from the greenhouse, the director says cut, revealing all this to be a part of the film. The actor that played Tom, Devante', could be seen inside the greenhouse with zombie kid actors. If Sarah, Emma's actress, talks to him, Devante' will say how he can't wait to take off the suit he's been wearing. He later appears inside the house where others are partying. When asked by Sarah, Gary's actor, Dan, denies that the filming site was the location of a string of actual murders, waving it off as simply a rumor. As Sarah drives home, the camera slowly moves to the trunk of the car, revealing the unmoving, bloodied Easter Ripper stowed away inside.

The Easter Ripper can be seen in the distance, peeking behind corners or over ledges before disappearing. He then actively appears at the end of the corridor and charges at Justin, forcing him to retreat into the bathroom. If he captures Justin, a cutscene will play of the Easter Ripper grabbing the kid and dragging him away, ending the prologue prematurely. If Justin hides in one of the bathroom stalls in time, Easter Ripper will enter and check three random stalls before leaving. After Justin alerts Janitor Jack in the staff room and is locked inside the office by the latter, the lights will go out. During this time, the Ripper kills the custodian while he's looking for a phone, takes his keys, unlocks the break room and captures Justin.

Just like before, the Easter Ripper will appear momentarily in the hallways when Emma exits rooms or enters another area, moving off-screen in the blink of an eye. Shortly after blocking all the exits and killing the other crew members, he begins his hunt, wandering the house looking for Emma. If he spots her, he will chase after her and attack with his large sickle. He can be avoided by running away or fought back against with the fire poker and the gun. After taking a certain amount of damage, the Easter Ripper will run away and come back after a certain amount of time. Emma is able to hide in wardrobes and under tables. If the Easter Ripper spots the player hiding, he will pull them out. If Emma is hit too many times, one of three cutscenes will play of the killer brutally slaughtering Emma: 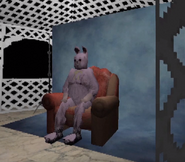 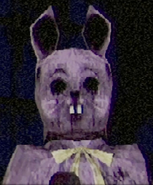 Tom as he appears as a cameraman.

Beta Easter Ripper with an axe

Easter Ripper on the Steam banner