"Whoever lives here seems to have the mind of a child." -Megan describing Killer's lair.

Little is known about him. He's a very tall, deranged psychopath who lives in a long-abandoned factory in the middle of nowhere and abducts local hitch-hikers before butchering them with his power drill. In the Power Drill Massacre, he sets his sights on Megan. Megan can stumble upon his lair, and the decorations imply he has the mind of a child, as Megan herself points out. Whenever he is chasing Megan, he lets out bellowing, pig-like squeals, and whenever he tries talking to Megan after stripping her naked and caging her in one of the endings, he talks through inhuman gibberish. She can't understand him, so he kills her.

He makes a brief appearance at the end of night watch as Park Ranger Jim begins hearing cries for help after investigating a campsite. Upon going to investigate he is ambushed by the driller killer and knocked unconscious. When he wakes up he is trapped in a cage in the driller killer's lair with his hands bound behind his back. The driller killer peeks around corners grunting several times before charging at Jim and killing him.

He looks Similar to Neokalus Burr but with different textures, being an imposing man in a grimy, white boiler suit, black gloves, a white mask, and dirty brown hair, armed with a power drill. 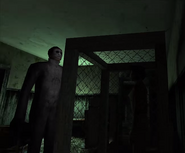 The Killer trying to communicate with Megan.

The Killer trying to communicate with Megan (Camera 2) 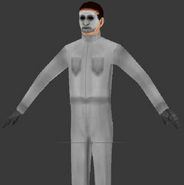 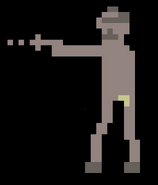 The ghost first seen in the game.

The Driller Killer rushing at Jim

The Driller Killer looking at Jim caged up

The Drill Killer staring into your soul...
Add a photo to this gallery
Retrieved from "https://puppetcombo.fandom.com/wiki/Driller_Killer?oldid=2807"
Community content is available under CC-BY-SA unless otherwise noted.