Dr. Edward Sullivan is the main antagonist in The Glass Staircase.

"They speak of the day the machine is finally fed the blood of the last innocent. They speak of the blood-red sky opening to their lords. The convergence of the two worlds. The legions of our fallen that will return to herald in the reconnection of the true world to our own, and the slaughter that will fill every city of man, and that their own bodies will begin ascending in their holy vessels. Everything I've been seeing has been given a new context, and I realize that I had been betrayed. Every single thing the entity had told me had been a means to complete the bridge, Cain's terrible staircase to his gods. Were I a weaker man, perhaps my mind would have been so gone as to this news meaning nothing to me, but the truth is before my eyes. I will bring the devil to this world if I allow the machine to continue running. The more blood I spill the closer I get to ending it for all of us."

Sullivan was once a field medic who patched up soldiers in the Great War. He returned home in 1918 to his wealthy estate and lovely wife but began seeing visions of an eldritch God through a fever-like "Heat" induced by his PTSD. Becoming more and more desperate and obsessive over the years, he devolved his mansion into a laboratory for an experiment to summon God, aided by a cult of zealots also infected by the Heat. Sullivan soon succumbed to the side effects of his ungodly science, and not long after he realized what he was doing was a huge mistake and started doing everything in his power to stop the machine he had created from activating.

According to research notes that can be found in the underground lab, as a result of working near the pylons, the radiation mostly affected his physical appearance and behavior. His whole body appears to have completely swollen, with veins visible and some mass increased in his left leg. A long thick claw appears to have grown out of his right arm that he uses to kill. Dr. Sullivan also wore a mask that was worn by the plague doctors, hiding his distorted facial features as the note also described. In terms of behavior, he displayed signs of violent mania, such as lashing out and attacking other subjects. There are portraits and busts of him that can be found underneath the manor, hinting at his former human appearance before the mutation took over.

During the first encounters with him, he walked slowly and moaned as a sign of pain and irritation every time Margaret shot him with a rifle. In the end, as a result of an explosion, Dr. Sullivan was on fire and he lost his plague doctor mask, revealing his distorted face. He was also much more aggressive than before as he sprinted towards Margaret.

Dr. Sullivan could be heard over intercom informing the servant girls to take their pills and follow the instructions. While wandering the manor, Helen hears a knock on the doors. She opens the doors and screams in horror. The game then abruptly cuts to the second day. Dr. Sullivan is first physically encountered on the second day. After acquiring the box at the front gate, Betty heads back through the maze and encounters a giant Dr. Sullivan. The screen slowly fades to white afterward. On the third day after navigating through the dark rooms of the manor, a chandelier suddenly falls onto Dorothy, trapping her. Dr. Sullivan is then seen slowly approaching Dorothy. The screen fades to white as Dorothy's screams are heard.

On the fourth day, after navigating through the underground base, Margaret enters a room and hides under the desk after she hears somebody coming. Dr. Sullivan enters the room and quickly leaves. Once Margaret enters a large experimental/electrical room, she is confronted by Dr. Sullivan who jumps from above and attacks her, but she manages to defend herself with a rifle. After a long fight, Dr. Sullivan passes out from the wounds.

After activating the machine which caused an explosion, Margaret fights her way through the hordes of undead and manages to get back to the manor. As everything seems to be finally over, the enraged Dr. Sullivan who survived the explosion, suddenly bursts through the doors and charges at Margaret. This time, Margaret blows his head with a rifle, causing Dr. Sullivan to finally drop dead on the floor, his body burns to ashes afterward. 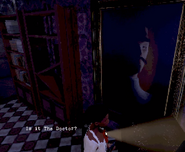 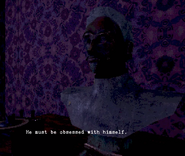 Giant Dr. Sullivan encountered by Betty in the maze. 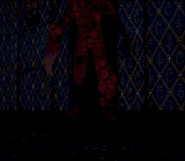 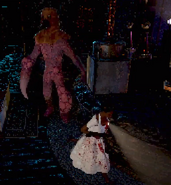 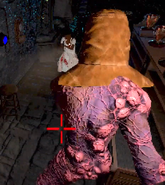 Close up shot of Dr. Sullivan's back 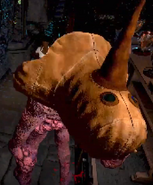 Close up shot of the Plague doctor mask worn by Dr. Sullivan

Enraged Dr. Sullivan bursts through the doors and attacks Margaret

Dr. Sullivan sprints towards Margaret for one final fight.