Christine Wilbur is one of the hidden characters in the Power Drill Massacre.

"...She's my little girl. We just want her back. We called her for dinner and she just wasn't there anymore. There was no bear or a cat. We didn't hear any animals. Somebody grabbed her. Somebody took her from us."

According to a torn newspaper article that can be found in the abandoned factory, her name is Christine Wilbur. She has blue eyes, brown hair with two ponytails. She wears a blue-white squares dress, black shoes, and white long socks. Her age is unspecified.

She was camping with her parents and while she was playing near the bushes towards the edge of the campsite area, she was abducted by the killer and taken to the abandoned factory where she was presumably killed.

Christine can be seen running down the hallways, staircases, and disappearing. In the sugar tunnel, Megan can find a Teddy bear on the ground, which was presumably Christine's toy, also hinting that while the killer was taking her through the sugar tunnel to his lair, she dropped her teddy bear as a result of resisting. After Megan collects all 3 keys and unlocks the door, she enters a long hallway. She sees Christine in the hallway and calls for her, but Christine doesn't answer and instead runs away. Megan also runs after her. After Megan catches up to her, Christine stops running. The killer then appears and Christine quickly vanishes.

Christine running down the staircase. 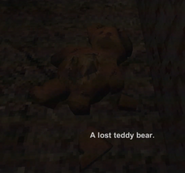 Christine running away from Megan in long hallway