Bongo the Clown is a re-animated clown doll and a character in Nun Massacre. He also appeared in Evil Clowns as one of the enemies.

Bongo can be seen inside of Mrs.Mcdonnel's house sitting on a drawer inside a room that can't be entered. He also appears in the televisions when Mrs. McDonnell inserts VHS tapes to distinctive VCRs. He will forgive her once this objection was accomplished by collecting and inserting all video tapes, unlocking the good ending.

Bongo was later physically seen hanging by a chain inside the room where McDonnell is preparing to burn the Nun alive. Interacting the doll as an attempt to communicate with him simply displays the text - "It's hanging by a chain". After Mrs. McDonnell kills the Nun by burning her, Bongo says "You are forgiven".

Bongo is one of the main enemies and is armed with a pocket knife, as well as appearing in large groups. He wanders the halls and will chase and attack the player. Because of his small size, he's relatively fast, making him difficult to kill. Bongo only takes 10% off the player's health. If the player manages to escape from him, Bongo will continue wandering the halls in search of the player.

Night of the Clowns[]

Bongo briefly appears in the prototype version of Night of the Clowns. He can be seen sitting on the chair in one of the dark corridors. Shooting Bongo will do nothing but to waste bullets. When clicking on Bongo, protagonist will say "Thanks, I hate it."

Bongo only appears as a collectible item in Blood Maniac. There are 8 Bongo the clown dolls scattered across the town.

Bongo the Clown as seen in the Nun Massacre game's cover art. 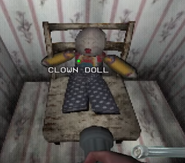 Bongo in Night of the Clowns.

Community content is available under CC-BY-SA unless otherwise noted.