Billy is the playable killer and villain protagonist in Feed Me Billy, Feed Me More Billy and Feed Me Billy demake. He also appears in Evil Clowns, and Scary Tales Vol 1.

Billy appears to be a tall Caucasian adult male with brown hair and is of unspecified age, height, and weight. He wears a navy blue boiler suit, a clown mask with a red hair and dark-colored hat, black gloves and brown shoes. He wields a Bulldog revolver in his left hand to kill people.

Very little is known about Billy's background. What is known is that at some point, he had made contact with a religious organization known as CFV and was only recently accepted into their midst after becoming "enlightened" with the completion of their "series".

Billy is shown living in a small, dilapitated home in the countryside and wakes up to a call on his satellite phone. Picking it up, a voice, apparently belonging to a senior member of CFV, congratulates him on passing initiation and informs him of a package should have reached his address, telling him to use its contents to "begin creating [his] Father's vision".

Ostensibly as part of his new role in CFV, he is tasked to become the caretaker of a large man-eating hole that has suddenly appeared in his closet, which forces him to embark on a quest around town in search for suitable fodder for the Hole. Before he leaves in his pick-up truck, Billy goes to the table with the already opened parcel and equips the items he has laid out on the table: a flashlight, a clown mask and a loaded gun.

While cruising a rural road, he sets his sights on a woman using a payphone by a gas station. Billy parks nearby and shoots her dead, then loads the body on the cargo bed and tosses it into the Hole, satiating it for the time being,

The next day, Billy awakens to find a seemingly threatening message underneath his door, whose author claims to know what he does at night and is aware of his deeds. Nonetheless, he ventures out to hunt once more, this time in a forest and murders three people camping to appease the Hole.

On the third night, Billy hears the Hole acting up again in hunger, but before he can do anything, he is rushed and shot in the face by a man identical to him. His phone ringing rouse Billy from his nightmare, but this time, a voice unsettingly repeats the words "You need more victims" in a low, eerie tone before cutting off. He has also received another note, which says that Billy "won't get away with it". This time, Billy breaks into a house and murders the couple inside. After feeding their corpses to the Hole, apparently pleased, it expels a goat made out of flesh, abruptly ending the game.

In the sequel, Billy appears to have moved and lives in an equally crammed, but much more furnished, farm house, around 5-10 minutes away from a night club. At the start of the game, Billy arrives at the night club (unmasked) and pays off the bouncer to let him in. On the dance floor, he gets rejected by almost all of the partygoers, except for one, either a man named Rusty or a woman named Jean (player determined). This person will find Billy "cute" and is charmed by him, offering to talk if Billy buys them a drink. Billy will give a false name and can tell the person a series of half-truths or outright lies about his life, after which he invites them back to his house with the promise of cocaine. At his house, he gives the person what seems to be laced cocaine, which the person immediately notices after ingesting it. Freaking out, the victim makes a run for it, but passes out before reaching the hallway. Offscreen, Billy takes their clothes off and hangs them on a meat hook inside a cold storage room. Billy then douses them in gasoline, and "cooks" them with a flamethrower, all while they are still conscious. The burned corpse is then taken and fed to the Hole.

Billy appears on each level and like other clowns, he wanders the halls in search of the player. If he spots Jean, he will stand still and start shooting her with his pistol. He takes 20% off the player's health. Billy can be killed with weapons. There is more than one Billy in the game.

In the story mode, after completing all four tapes, the main character finds himself in a padded room following his arrest, presumably for possession of the snuff films and extensive animal cruelty. Looking around, Billy will spontaeously appear in the cell with the man and laugh at him. 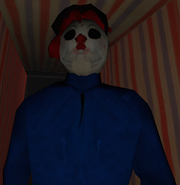 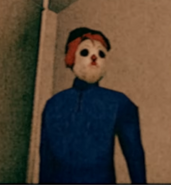